Temporary Admission: does the nationality of the aircraft registration matter? 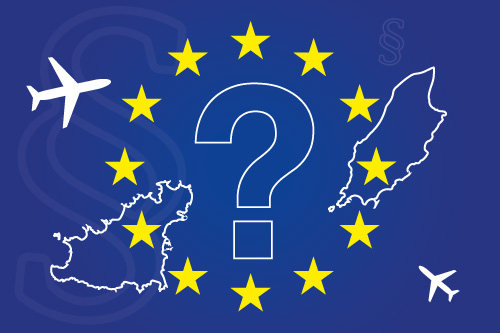 The result
The feed-back is unanimous and the result is that the mentioned EU aircraft registrations cannot be used in combination with the Temporary Admission procedure. This also means that an Isle of Man or Guernsey registered aircraft based e.g. in the Middle East or Hong Kong is basically not allowed a single entry into the EU if the Temporary Admission procedure is used. The risk is that local customs will asked for a full importation to be completed with a full payment of the VAT.

Figure 1: Corporate aircraft using Temporary Admission (TA) in various EU-member states
What kind of aircraft registration will local customs accept for use under the TA procedure?

1) Both jurisdictions are outside the EU but inside the EU customs area.

The Isle of Man do it differently!
Even though the above result is unanimous, it is common knowledge at least within the aviation society that Isle of Man customs for years have accepted that their own M-registered aircraft could be used combined with the Temporary Admission procedure. It is unknown to us under which circumstances and legal references such a combination can be legal and aligned to the EU Customs Code and guidelines from the HMRC.