Aarhus
Aarhus is a city of growth with a population of more than 300,000, Aarhus is Denmark’s second largest city. It is at heart, however, also Denmark’s youngest city when you consider the average age of its habitants which is far lower than anywhere else in the country. At the University of Aarhus alone there are nearly 35,000 students, and there is a total of 25 educational and research institutions in the city, which has also have created a fantastic environment for many entrepreneurial and innovative companies within research and development, graphic design, architecture, engineering, computer science, software design etc.

Aarhus could well be Denmark’s oldest city; evidence has been found which shows that there was a Viking settlement here as early as the 8th century. The Vikings settled by the mouth of the river close to the Cathedral and next to our preferred accommodation Hotel Royal near the “Bispetorv” square which was also the centre of the town 1250 years ago, and in The Viking Museum in the basement of the Nordea Bank you are standing right next to the rampart which the Vikings built around Aarhus in the 10th century.

Aarhus is often called the smallest big city in the world as we have all the facilities as any big city but still have a cozy milieu as a small village. You will find a lot of shops, cozy restaurants and cafés, museums, art galleries etc.

Lots of publishers have been writing about Aarhus the recent years, please have a look at the below links for more information.

Life and Thyme, 48 Hours in Aarhus

Travel+Leisure, Move Over, Copenhagen: In Denmark, It’s All About Aarhus

Danish visa & immigration rules for pax & crew
Please be sure that all crew and passengers meet the Danish/EU visa and immigration rules. A Danish visa cannot be obtained upon arrival but must be obtained in advance through a Danish embassy. A valid Schengen visa does also grant access to Denmark. Crew members (e.g. pilot, FA, or technician) with a valid crew member license/certificate will not need a visa, if the crew member is a part of the crew flying the aircraft both in and out of Denmark/EU. A company issued crew card will not work as documentation.

SOURCE 1: The Danish Immigration Service
List of countries with a visa requirement and visa-free countries

In this Overview of Travel Documents, Visa Conditions and Border Crossing Points you can e.g. find an overview of foreign nationals who are exempt from the passport and visa requirement and an overview of approved border crossing points.

Passengers can apply for a Danish/Schengen visa here
A Danish visa normally grants you the right to stay in the entire Schengen region for up to 90 days.

SOURCE 2: The Danish Air Navigation Office
GEN 1.3 Entry, Transit and Departure of Passengers and Crew
For crew member (see page 1, paragraph 7) for the description of being visa exempt.
For passengers (see page 2, section III,1) for the list of aliens admitted entry into Denmark without any visa put onto their passports or other valid travel documents before entrance. 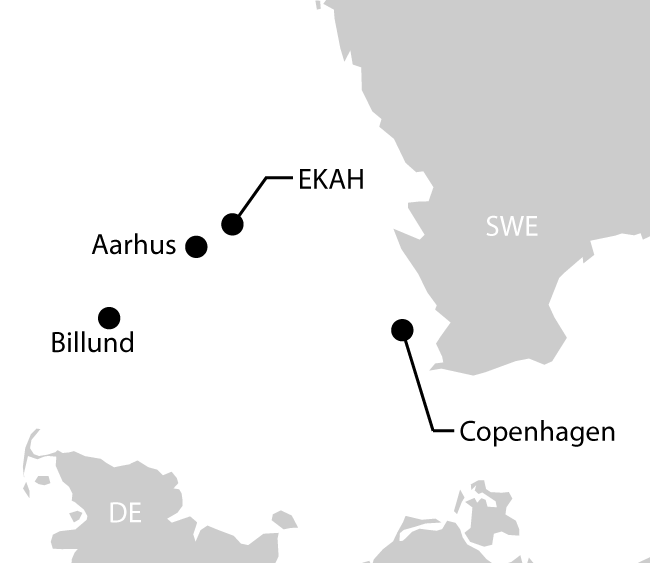 Important: before you start a flight to Denmark, please check with us, that you have received the latest version of the CREW INFO with practical information about the ferry flight to Denmark.

Aarhus Airport (EKAH)
Aarhus airport is our local airport and is placed 40 km from the city center.